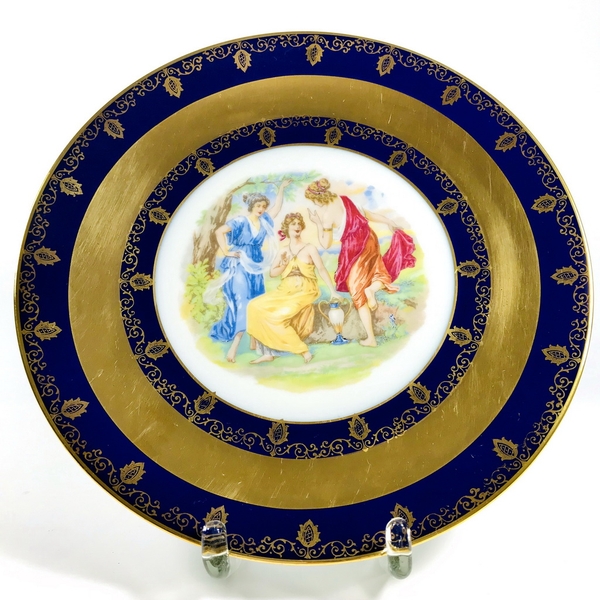 The back stamp was used from the 1920s onwards, stating Script 'EPIAG' above 'D.F.' and 'CZECHOSLOVAKIA' . “EPIAG” is not a manufacturer, but the name of an association of various Altrohlau porcelain companies in the Czech Republic. Each company had their own variation of the mark, therefore, in order to know which of the companies produced the set, one needs to see the backstamp. The DF on these plates is Dallwitz (Dalovice). The history of this factory started in the year 1804 after Johann and Wenzl Ritter von Schönau decided to found a stoneware factory in Dallwitz. No exact dates known for the mark 'PORCELAINE FINE DE BOHEME' around 'EPIAG' and 'D.F.', all above 'CZECHOSLOVAKIA' & 'CARLSBAD'.

There is a good reason for the “OEPIAG” and “EPIAG” marks. Both OEPIAG and EPIAG were associations of different potteries put together by the Austrian Government in 1918 to promote the sale of Bohemian pottery and porcelain. The name “OEPIAG” is an acronym for “Österreichische Porzellan Industrie AG,” which translates to Austrian Porcelain Industry. Any pottery with this mark generally predates 1920, when the name was changed Erste Böhemische Porzellan Industrie AG—First Bohemian Porcelain Industry—and the mark was switched to “EPIAG.”

Carlsbad or Karlsbad is a mark used on china made by several factories in Germany, Austria, and Bavaria. Many pieces were exported to the United States. Many of the pieces are biscuit jars, bowls, plates, and platters from the late 1800s and early 1900s. Carlsbad is a city in Czechoslovakia, home to the factories that made the exported porcelain. Most of the pieces available today were made after 1891.

Czechoslovakia is a popular term with collectors. The name, first used as a mark after the country was formed in 1918, appears on glass and porcelain, and other decorative items. Porcelain made in Czechoslovakia was exported to Europe, North and South America, and Australia. Although Czechoslovakia split into Slovakia and the Czech Republic on January 1, 1993, the name continues to be used in some trademarks.